Starting with PySwarm V0.5, you no longer need to directly edit the PySwarm Python script to generate your animation sequences. Instead, you now select the rules and enter parameters through the "PySwarm Interface Application" (PIA). PIA will build the PySwarm script for you. Once the script is built, you import the resulting file into Carrara scene.

PIA build a Python Script file using a PySwarm Shell (a text file) with the Python language commands, along with the rules and parameters you have set. Using the "Import" command in Carrara, you import the PySwarm Script file into your Carrara scene. PyCarrara, a plug-in for Carrara, reads the script you are importing, and inserts keyframes that animate the BOID objects in your scene, ready to render.

To run the PIA application, you can either:

Getting Started with PIA[]

When you first run PIA, the following screen will appear: 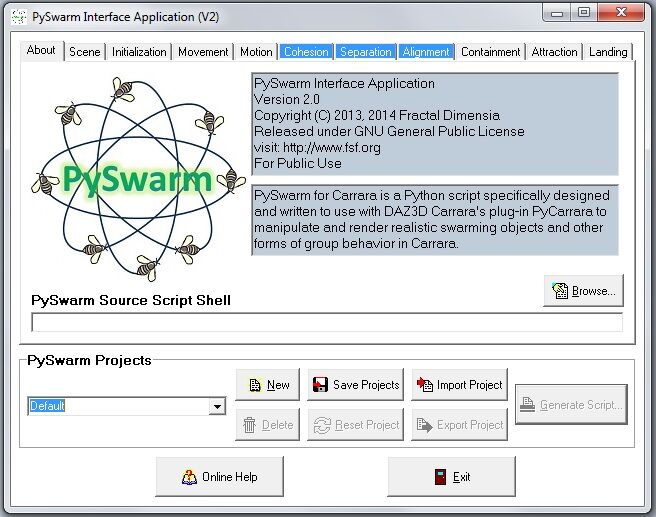 The first thing you will want to do is to tell PIA where to find the PySwarm Source Script Shell. This text file contains the shell (or wrapper) Python script text PIA will need to generate the PySwarm script. The reason the PySwarm script is generated this way is to simplify updating the shell file ("PySwarm Shell Vxx.txt") without having to update the application.

To set this field, click the "Browse..." button next to the Script Shell field. This will cause the "Open" dialog window to appear. If you followed the installation instructions above, the file named "PySwarm Shell V__.txt" should appear in the list. (The "__" refers to the PySwarm script version number.) If not, you will need to navigate to the folder containing the shell file. Select the shell file from the list and click the "Open" button.

The PySwarm Source Script Shell field should now show the directory and file name for generating PySwarm scripts. Once this field points to the shell text file, you won't need to update this again until you update the shell file with a new version (e.g., a new release).

You can find information about managing PySwarm projects at the following wiki page: link.

Working With the Parameters[]

All of the PySwarm parameters necessary to create BOID animation sequences are accessible through PIA. Before beginning to set the parameters, make sure you have selected the right project you want to work with (as described above). The currently selected project name always appears in drop-down menu under "PySwarm Projects" near the bottom of the PIA window.

The PySwarm parameters have been organized into areas accessible via a number of tabs at the top of the PIA window. Click on a tab to display the parameters related to that area.

The first five tabs (About, Scene, and BOIDs) provide access to general PySwarm parameters; e.g., those related to animation sequencing, cameras, BOID naming, BOID initialization, and movement and motion animation settings. Each of the remaining six tabs relate to each of the six PySwarm rules.  You may note some of the rule tabs are highlighted in a dark color (as in the image above). This allows you to quickly note which rules are currently active for your project.

More About The Parameters[]

Active Rule Quick Reference You will note some of the tabs may be shaded in a dark color. Tabs are shaded when you activate that PySwarm rule. This gives you a quick reference to know which rules you currently have turned on before generating your script.

If you are not sure what a parameter is for, slide your cursor over the form field. A short context-sensitive help will pop up with a brief description.  If you need more information about a parameter, you can click the "Online Help" button at the bottom of the PIA window. PIA will launch your default internet browser and bring up the wiki page related to the tab you have currently selected.

Once you have set all of your project's parameters, you are ready to generate the PySwarm script. Click the "Generate Script..." to the start the process.

Remember you cannot generate scripts from the default settings.

To read details about generating the PySwarm script, click here.

To exit the program, click the "Exit" button or the Close "X" icon in the top right corner of the window. PIA will ask you to confirm exiting, and then automatically save the project parameter settings to the "Projects.pys" file before closing.