Back to PIA's Main Page[] 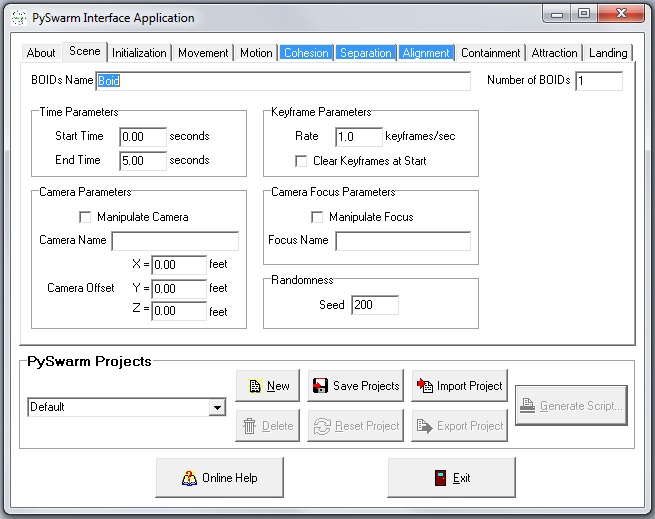 Scene parameters are those that relate to the general animation of your Carrara scene.

Two important parameters for animation are the BOIDs' base name and the number of BOIDs to be animated. These parameters are needed so PySwarm can find all of the BOIDs in the scene to be manipulated.

This parameter contains the base name of the BOIDs in your Carrara scene. The base name is the name without the numbers that follow. Click here to learn more about naming your BOID objects.

Time parameters relate to the timeframe you want PySwarm to insert keyframes for BOID animation.

Set this parameter to the time in the animation (in seconds) to start inserting keyframes.

Set this parameter to the time in the animation (in seconds) to stop inserting keyframes.

Keyframe parameters relate to how PySwarm is to insert keyframes in the BOIDs' sequencer.

Starting with V0.4, it is possible to run multiple PySwarm scripts for different timeframes within a single simulation. As such, you don’t want PySwarm to clear keyframes inserted in previous imports. Check this box if you want PySwarm to clear the existing keyframes before inserting new ones. If you are importing a PySwarm script multiple times (performing test runs), you will probably want to clear the keyframes.

Camera parameters relate to having PySwarm insert keyframes for a camera in your Carrara scene. Camera manipulation is currently limited to moving the camera relative to the BOIDs' center of mass.

Enter the name of your Carrara scene's camera object you wish PySwarm to track with the BOID group.

This 3-D (x,y,z) value determines where to place the camera relative to the BOIDs' center of mass. For each keyframe inserted, the camera is repositioned (x,y,z) feet from the computed group center. The result is a camera that tracks the movement of the group.

The camera focus parameters tell PySwarm to move (manipulate) a specific object in your Carrara scene. Focus manipulatin is currently limited to keeping the focus positioned at the BOIDs' center of mass. By setting your scene cameras to focus on this object, they will (generally) keep the BOIDs in the screen area. Examples of objects that make good focii are target helpers and basic (invisible) primitives.

Enter the name of the object that will be used to point the camera at the group.

Changing this value alters the randomization effects when importing the PySwarm script. If a specific seed value does not provide a good animation sequence, you can always try a different seed.