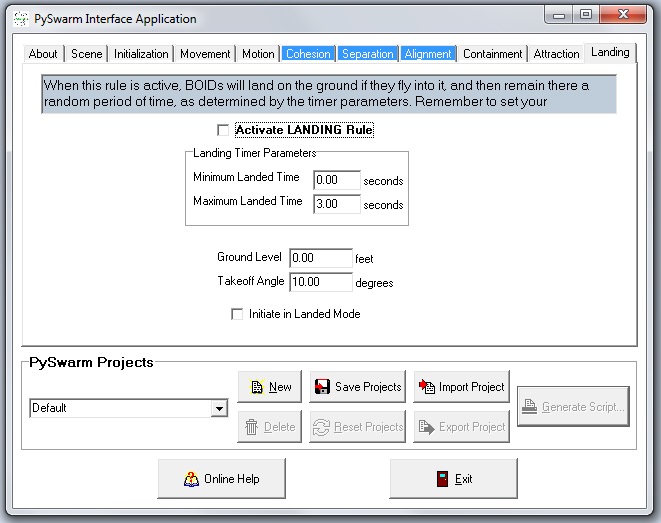 When LANDING is activated, BOIDs will land on the ground if they fly to (or strike) it. When BOIDs land, they will remain there for some random period of time, as determined by the rule's parameters.

The minimum amount of time a BOID will remain on ground when landed (in seconds).

The maximum amount of time a BOID will remain on ground when landed (in seconds).

Several other parameters provide additional controls on this rule.

This z-axis value (in feet) defines the ground level for the simulation. When a BOID strikes (or moves below) this altitude, it is placed on the ground, setting the BOID's pitch and bank to zero, and it's timer is initiated.

This is the pitch angle (in degrees) BOIDs will take when their landing cycle has ended. You should not use a value of 0 as this will cause BOIDs to continuously start to fly, but then encounter the ground again, and re-land (though this does make for an interesting effect!).

This parameter initiates (at the time specified by the sim_start_time parameter) all of the BOIDs in landed mode. The amount of time they remain in landed mode is set with the Landing Timer Parameters above.

A good example of using the "Initiate Landed" feature is when you want to launch a number of BOIDs at a seemingly random difference in time. Examples might be launching rockets from a container (see video below where this was done).