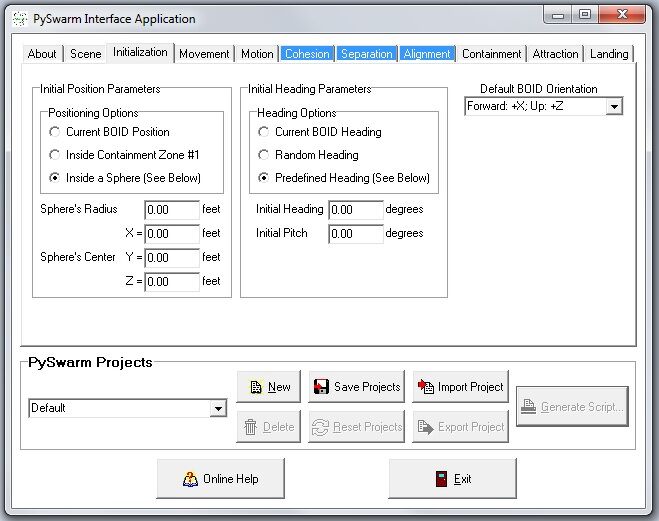 This tab contains parameters relate to the initialization of BOIDs in the scene - initial positioning, initial heading, and BOID orientation.

PySwarm offers a number of different ways to initialize BOIDs' positions within the scene.

There are three options available to initialize the starting positions of the BOIDs in the scene:

The radius of the sphere (in feet) when the third positioning option is selected.

The center of the sphere (x,y,z coordinates in feet) when the third positioning option is selected.

Note: You will not be able to edit the sphere radius and center parameter fields until you select the "Inside a Sphere" radio button in the Initial Positioning Options group.

You also have a number of options available to initiate BOID headings at the start of the animation.

There are three options to initialize the heading of BOIDs at the start of the animation sequence.

When the third option is selected, all BOIDs' heading begins with this value (in degrees). A value of 0.0 degrees points in the +x axis; 90.0 degrees in the +y axis; etc.

With the third option selected, you can also specify the angle (in degrees) that all BOIDs will move in (up and down). A positive angle positions the BOIDs moving upwards; a negative angle points the BOIDs downwards. This angle cannot exceed +/- 90.0 degrees.

Note: You will not be able to edit the initial heading and initial pitch parameter fields until you select the "Predefined Heading" radio button in the Initial Heading Options group.

Select one of the orientation options from the pulldown list.