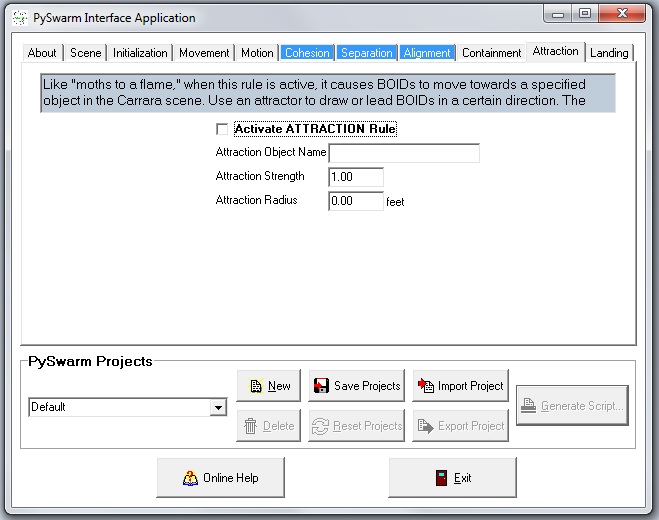 The name of the attractor object in the Carrara scene.

This value represents the strength of the attraction the attractor object has on the BOIDs. Higher values mean a stronger pull.

You can also set a distance (radius) from the attraction object for which BOIDs will be affected by the attractor. BOIDs that fly within this distance will be attracted; those outside will not.

Below are some examples for using the Attraction Rule.

Add a target helper object and use a Motion Path to create a path. Use it as the attraction object in the scene to guide BOIDs along the same path (only using more natural motion).​

If you want BOIDs to be repelled by an object in your scene (even one that is moving), set the Attraction Strength value to a negative number (e.g., -1.0).
If you use a negative strength with an attraction radius, you can create a keep-away zone about the attractor. This works great if you are animating bugs in a room with a single bulb light source, where the bugs attempt to stay in the dark. Use the light source as the attractor object, use a negative strength, and set the radius to be at the edge of the light.